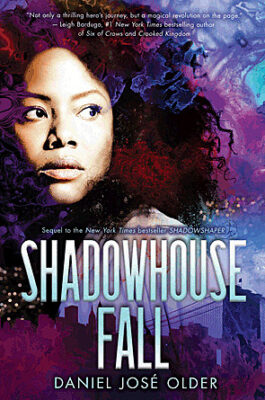 Sierra and her friends love their new lives as shadowshapers, making art and creating change with the spirits of Brooklyn. Then Sierra receives a strange card depicting a beast called the Hound of Light -- an image from the enigmatic, influential Deck of Worlds. The Deck tracks the players and powers of all the magical houses in the city, and when the real Hound begins to stalk Sierra through the streets, the shadowshapers know their next battle has arrived.

Sierra and Shadowhouse have been thrust into an ancient struggle with enemies old and new -- a struggle they didn't want, but are determined to win. Revolution is brewing in the real world as well, as the shadowshapers lead the fight against systems that oppress their community. To protect her family and friends in every sphere, Sierra must take down the Hound and master the Deck of Worlds . . . or else she could lose all the things that matter most.

In this extraordinary sequel to his New York Times bestselling Shadowshaper, Daniel José Older weaves a fresh, relevant tale of power and protest, while taking us deeper into the magic that has captivated readers everywhere.
Daniel José Older

--- - A guttural howl shattered the stillness of the night. Sierra froze and looked around. Her friends were still running. They hadn't heard it. The terrible sound trailed off, and in the stillness that followed, Sierra wondered if she'd heard it at all. Then it came again, louder this time, and Sierra dropped to her knees with shock. It was inside her, relentless and mournful.

She had to get that card.

She was up and running before the second howl finished. She bounded past her friends, the shadow spirits carrying her along like an impossible wind. They lifted her up and elongated each stride until she was fast-floating across the dark park. And then she was back at the small clearing where Mina had been standing just a few hours ago. Sierra's heart went into overdrive as she gaped at the empty spot of soil where the card had been.

"Make a circle facing outward," she called when she heard her friends arrive. "Get ready to 'shape. Something's coming."

They complied without a sound, and Sierra dropped to her knees and rustled some of the fallen leaves around, trying not to let the tremble she felt inside reach her fingertips. She grazed something stiffer than the crinkly leaves, grabbed it, and then let out a grateful sigh. "Got it!" she yelled.