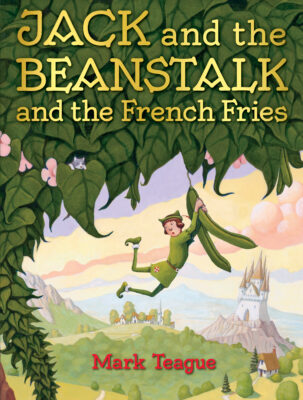 Jack and the Beanstalk and the French Fries

When Jack trades the family cow for a handful of magic beans, he gets more beans than he ever expected or wanted. It's bean porridge for breakfast! Bean salad for lunch! Bean chowder for dinner! It doesn't take long before Jack is tired of eating nothing but beans--no matter how nutritious!

But just as he's about to chop down his magic beanstalk, he meets a grumpy giant, who is just as sick and tired of beans as he is. Together, Jack and the giant cook up a plan to plant a vegetable garden full of tomatoes, corn, carrots, and russet potatoes that's bound to satisfy everyone.

A deliciously zany retelling of Jack and the Beanstalk from author Mark Teague that ends with one happy boy, a satisfied giant, and a large plate of french fries.