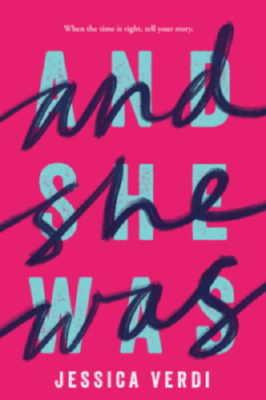 Dara's lived a sheltered life with her single mom, Mellie. Now, at eighteen, she's dreaming of more. When Dara digs up her never-before-seen birth certificate, her world implodes. Why are two strangers listed as her parents?

Dara confronts her mother, and is stunned by what she learns: Mellie is transgender. The unfamiliar name listed under "father"? That's Mellie. She transitioned when Dara was a baby, after Dara's birth mother died. She changed her name, started over.

But Dara still has more questions than answers. Reeling, she sets off on an impromptu road trip with her best guy friend, Sam, in tow. She is determined to find the extended family she's never even met. What she does discover -- and what her mother reveals, piece by piece, over emails -- will challenge and change Dara more than she can imagine.

This is a gorgeous, timely, and essential novel about the importance of being our true selves. The back matter includes an author's note and resources for readers.
Jessica Verdi

Jessica Verdi is the author of And She Was, My Life After Now, The Summer I Wasn't Me, and What You Left Behind. She is a graduate of The New School's MFA in Writing for Children program and lives in New York. You can find her online at jessicaverdi.com.

"I was assigned male at birth," she says quietly. "Marcus." The name comes out scratchy, as if it''s grown weak with disuse. "I had all the anatomical boy parts, and everyone assumed I was a boy. But even before I fully understood the differences between boys and girls, I knew I wasn''t what everyone wanted me to be. I couldn''t tell anybody what I was feeling, though."

"Which was what?" I press. I need to hear her say the words.

"That God had made a mistake. My body wasn''t right. People didn''t understand trans issues then the way they''re starting to now. There was no Jazz Jennings or Laverne Cox or Chaz Bono or Transparent. I never even heard the words transgender or transsexual until I was out of high school."

There they are. Those are the words.

I''ve heard about transgender people, of course. I''ve watched the reality shows and followed the political campaigns to restrict public bathroom access -- when two of your childhood idols are Billie Jean King and Martina Navratilova, it''s pretty much ingrained in you to care deeply about LGBTQ issues.

If it were anyone else, I''d hug them and say, "As long as you''re happy. I support you." Truly. But how am I supposed to do that now, when I''m finding out my own mother has lied to me -- intensely -- all these years? Lied about my origin and her past and the baby pictures and who knows what else. She didn''t trust me -- respect me -- enough to tell me the truth. I''m feeling even more lost now than I did before. Mom''s confession is not an answer' - ! ' it''s a domino that''s tipped over a thousand other questions.'