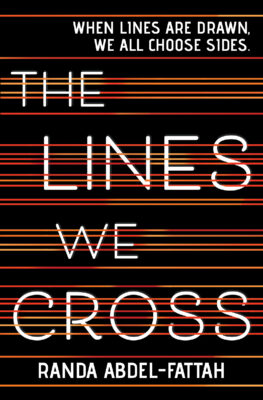 The Lines We Cross

Michael likes to hang out with his friends and play with the latest graphic design software. His parents drag him to rallies held by their anti-immigrant group, which rails against the tide of refugees flooding the country. And it all makes sense to Michael.

Until Mina, a beautiful girl from the other side of the protest lines, shows up at his school, and turns out to be funny, smart -- and a Muslim refugee from Afghanistan. Suddenly, his parents' politics seem much more complicated.

Mina has had a long and dangerous journey fleeing her besieged home in Afghanistan, and now faces a frigid reception at her new prep school, where she is on scholarship. As tensions rise, lines are drawn. Michael has to decide where he stands. Mina has to protect herself and her family. Both have to choose what they want their world to look like.

Randa Abdel-Fattah is an award-winning author, former attorney, and an expert on Islamaphobia in Australia. She is the author of the critically acclaimed novels Does My Head Look Big In This? and Ten Things I Hate About Me, as well as the middle-grade novel Where the Streets Had a Name. Ms. Abdel-Fattah lives in Sydney, Australia, with her husband and their children.

I glance in the direction he's motioning and, noticing a reporter and cameraman, smile.

"Your mum's press release must have worked." He runs his fingers through his thinning hair and readjusts the flag. "How do I look?"

"Like the leader of a new political organization," I say proudly. "Who's sweltering under that thing. Don't forget it's all about the sound bites. Aussie Values aims to represent the silent majority blah blah. The kind of thing you and Mum were practicing last night."

"We have about fifty members," Dad says with a grin. "In a population of twenty-three million, I wouldn't say that really constitutes a majority." He leans in close to me and winks conspiratorially. "But nobody needs to know that, hey, mate?"

The chants of the other protestors are getting louder. Rick, from our side, starts up a chant in reply. Game on. The atmosphere is electric, and people are fired up on both sides.

And then I see her.

Her eyes. I've never seen eyes like hers before. What color are they? Hazel and green and flecks of autumn and bits of emerald and I'm standing holding my sign and there she is, standing steps away, near the cop, holding hers (It's Not Illegal to Seek Asylum), and all I can think about is how the hell I'm going to take my eyes off her.

Her hair is jet black, hanging loose down her back, and I think hair that gorgeous has no business being on someone like her. She's wearing jeans and a plain white T-shirt. She's the most beautiful girl I've ever seen and it stupidly, inexplicably, throws me.