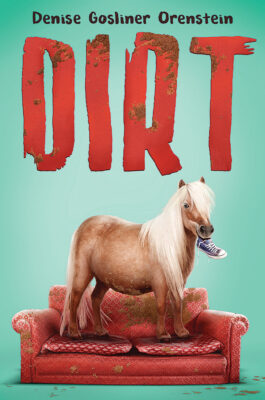 Things are hard for eleven-year-old Yonder. Her mother died and her father has sunk into sadness. She doesn't have a friend to her name . . . except for Dirt, the Shetland pony next door.

Dirt has problems of his own. He's overweight, he's always in trouble, and his owner is the mean Miss Enid, who doesn't have the patience for a pony's natural curiosity. His only friend is Yonder, the scrawny girl next door.

So when Miss Enid decides to sell Dirt for horsemeat, Yonder knows she has to find a way to rescue him. Even if that means stealing Dirt away and sneaking him into her own house. What follows will make you worry, will make you cry, and will ultimately fill you with hope, love, and an unshakable belief in the power of friendship. Especially the four-legged kind.
Denise Gosliner Orenstein

Denise Gosliner Orenstein has taught at American University in Washington, DC, as well as in bush villages throughout the state of Alaska. She has also cooked for an Alaskan village prison, worked as a PEN prison writing mentor, and taught literature classes and assisted in a canine therapy program for inmates. Most recently, as head of a school for children with learning differences, she introduced a curriculum based on two rescued Shetland ponies. Denise is the mother of two daughters and lives in Northampton, Massachusetts.