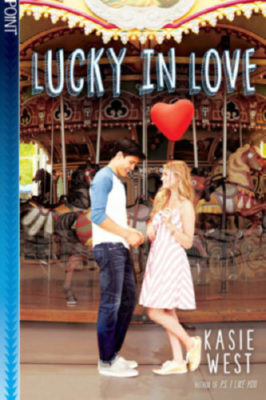 Maddie's not impulsive. She's all about hard work and planning ahead. But one night, on a whim, she buys a lottery ticket. And then, to her astonishment --

In a flash, Maddie's life is unrecognizable. No more stressing about college scholarships. Suddenly, she's talking about renting a yacht. And being in the spotlight at school is fun . . . until rumors start flying, and random people ask her for loans. Now, Maddie isn't sure who she can trust.

Except for Seth Nguyen, her funny, charming coworker at the local zoo. Seth doesn't seem aware of Maddie's big news. And, for some reason, she doesn't want to tell him. But what will happen if he learns her secret?

With tons of humor and heart, Kasie West delivers a million-dollar tale of winning, losing, and falling in love.
Kasie West

Kasie West is the author of several YA novels, including The Fill-in Boyfriend, P.S. I Like You, Lucky in Love, Listen to Your Heart, and Maybe This Time. Her books have been named as ALA Quick Picks for Reluctant Readers and as YALSA Best Books for Young Adults. Kasie lives in Fresno, California, with her family, and you can visit her online at kasiewest.com.

--- - The first number was 2. My ticket said 2 first as well. My heart was pounding in my throat now. The next numbers matched as well -- 15. My eyes went blurry for a moment and I blinked hard, clearing them. 23. 75. 33. All matched. There was one number left on the site. A red ball. The PowerBall, it was called. It was a seven. Lucky number seven. I took a deep breath and looked at my ticket. Seven. All six numbers matched.

I checked them again and then a third time, just to make sure. Was this really happening? Had I just won fifty million dollars? This felt like some sort of joke. I checked the heading of the site again -- PowerBall. And my ticket heading, same.

I won the lottery. I just won fifty million dollars.

A scream that started in my belly and traveled up my throat burst from my mouth. I almost didn't recognize it as my own. It was a scream of pure joy.