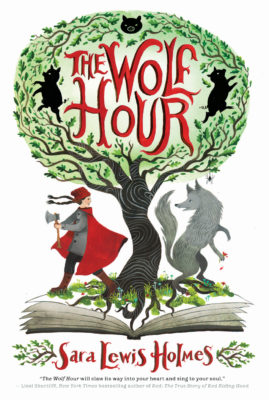 Welcome, my little lambs, to the Puszcza. It's an ancient forest, a keeper of the deepest magic, where even the darkest fairy tales are real.

Here, a Girl is not supposed to be a woodcutter. Or be brave enough to walk alone.

Here, a Wolf is not supposed to love to read. Or be curious enough to meet a human.

And here, a Story is nothing like the ones you read in books, for the Witch can make the most startling tales come alive. All she needs is a Girl from the village, a Wolf from the forest, and a woodcutter with a nice, sharp axe.

So take care, little lambs, if you step into these woods. For in the Puszcza, it is always as dark as the hour between night and dawn -- the time old folk call the Wolf Hour. If you lose your way here, you will be lost forever, your Story no longer your own.

You can bet your bones.
Sara Lewis Holmes

Sara Lewis Holmes is the author of Operation Yes, which was named to the Kids' Indie Next List and nominated for seven state awards, and Letters to Rapunzel, which won the Ursula Nordstrom First Fiction Prize. Thanks to her husband's service in the Air Force, she has written stories and poems in eleven states and three countries, as well as her current home of Washington, DC. Please visit her online at www.saralewisholmes.com and @saralewisholmes.

Welcome, my little lambs, to the Puszcza, where even wolves must live and die by the rules. It's an ancient forest, a keeper of the deepest magic, and there, fairy tales of the darkest kind are real. Some even call them spells, for if you're unlucky to be caught in one of them, you must play your part, all the way to the bitter end.
\t
Psiakrew! you say. You're trying to frighten me! Besides, fairy tales contain silly things like talking wolves and clever pigs and ugly witches. Ridiculous, but not dangerous.
\t
You're right, of course, if you mean the pantomimes recorded in books. But those printed words are like the sparse, thin-limbed trees at the edge of the forest -- nothing compared to the thick-boughed, magic-laden, spell-fraught depths of the Puszcza.

Here, clever pigs can follow every word of their mother's advice, and still have their lives blown down around them.

Here, an ugly witch can offer sweet things to a brave girl, and both can leave as empty as they came.

And here, a wolf can tumble down a chimney, neat as a bale of hay, into a pot over a hungry fire. No matter how many fancy words he knows.

So I don't blame you if you want to look away, little lambs. Look away until the wild jig of boiling water has loosened the scrubby fur from the wolf's flesh, and released his pike-sharp teeth from his soft pink gums. Look away until all that's left are bones.

But if you desire a life beyond the ragged edges of the forest, and if you wish to see how the living are plucked from the dead and the mad cleaved from the sane, and -- most of all -- if you're ravenous for another heart to beat in time with yours, come into the Puszcza.

There lived a talking wolf.

And a witch who told fairy tales.

You can believe those tales if you like, my lambs. You can be amused by the clever pigs who pop up from time to time. But never forget that in the Puszcza's deepest reaches, it is always as dark as the hour between night and dawn. Always the hour more people come into this world and more people leave it than any other. Always the hour the old folk call the Wolf Hour. If you lose your way then, you will be lost forever, your Story no longer your own.

You can bet your bones."