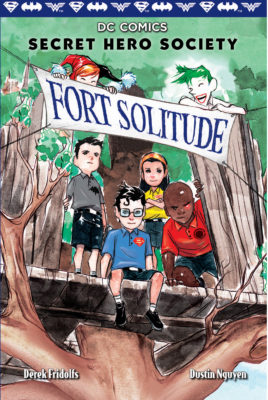 The follow-up to the bestselling hit Study Hall of Justice! Clark Kent is thrilled when he receives an invite to a spring break academic retreat. After taking down the villains of Ducard Academy the previous year, going back to life on the farm was a bit dull. Better yet, his friends Bruce and Diana have been invited there, too! What better way to spend spring break than with old friends (Poison Ivy, Harley Quinn) and new ones like Arthur Curry (Aquaman), Barry Allen (the Flash), and Vic Stone (Cyborg)?
When Clark arrives at Camp Evergreen he makes new friends, reconnects with old ones, and nothing seems weird at all! Well, that is until kids start disappearing... One by one... Plus, there's a lake monster, bigfoot has been spotted, there are reports of a boogeyman, and there may or may not be a UFO crashed into the lake. Clark, Bruce, and Diana will have to re-assemble the Junior Detective - er- Criminal Investigation Unit, in an all-new, supernatural adventure!
Derek Fridolfs