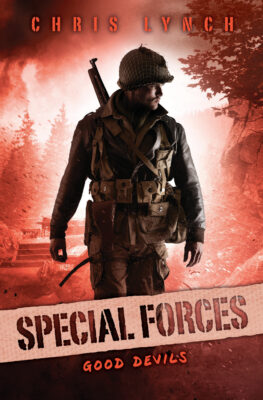 The First Special Service Force is an elite commando unit composed of American and Canadian troops. From the start, the Force is intended to go where other soldiers won't. The call for volunteers specifically singles out lumberjacks, hunters, prospectors, and game wardens as ideal candidates. And their training is anything but "basic," including intense lessons in parachuting, hand-to-hand combat, skiing, rock climbing, and adaptation to cold climates.

One tight group of young men have made a point of carrying The Commando Pocket Manual with them everywhere. They build a unified little community around it, a text to guide them through the war.

As this team travels through Germany, taking down Nazis as they go, they also carry calling cards to leave behind. The stickers read, in German, "The worst is yet to come."
Chris Lynch