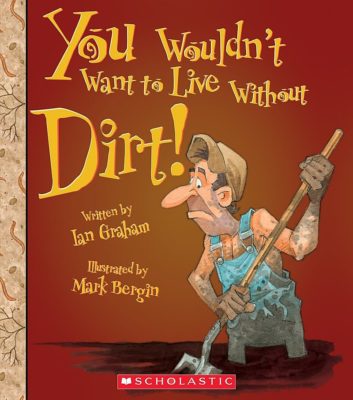 You Wouldn't Want to Live Without Dirt!

This series takes readers (Ages 8-12) on a historical journey, examining how people coped in the past and how they developed ingenious ways to make life safer and less unpleasant. Each book features full-color cartoon-style illustrations and hilarious speech bubbles to heighten interest, making the series attractive even to reluctant readers.

The ground would look different and many of the plants, trees and animals we know today would disappear. Dirt, and or soil, supplies a surprising variety of raw materials for making things. Learn about the ways dirt and soil have been used by humans over the centuries, from cave paintings to crop farming, and the exciting prospects for dirt and soil we may see in the future.
Mark Bergin