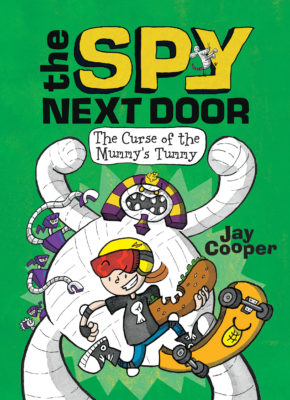 The Curse of the Mummy's Tummy (The Spy Next Door #2)

On a school field trip to the museum, Dexter puts his brand-new super-secret spy skills to the test. Someone has broken into the Egyptian exhibit to steal Pharaoh Hun-Ga-Re's greatest treasure...a sacred sandwich that can raise the dead! But who could be hungry enough to want a six-thousand-year-old snack? With an army of robot ninjas, a mustachioed mystery man, and a sneaky new classmate lurking around every corner, it's up to Dex to find the petrified hoagie first and save the world from a monstrous mummy's ancient curse...
Jay Cooper

Jay Cooper has worked as a creative director and designer of magazines, books, apparel, and advertising for two decades. He's had the good luck to design covers for New York Times bestsellers as well as literary classics, and the even better luck to work on art and advertising campaigns for over 100 Broadway musicals and plays. However, nothing makes him happier than returning to his literature-loving roots and creating and illustrating stories for kids. He lives with his wife and children in Maplewood, New Jersey.