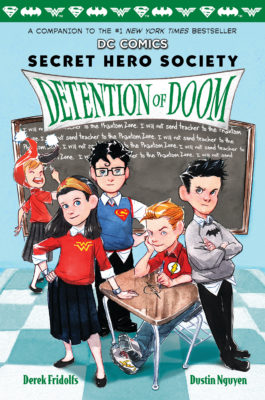 When Lex Luthor's family company, Lexcorp(TM), invites kids from all over the country to attend an honors ceremony, Clark Kent is happy to participate. That is, until his award trophy creates a portal to another dimension and sucks him in! Lucky for Clark (Superman(TM)), his old friends Bruce (Batman(TM)) and Diana (Wonder Woma(TM)n) along with newer friends Barry (The Flash(TM)) and Ollie (Green Arrow(TM)) are on the case! They'll have to travel to an alternate dimension to free their friend from Lex Luthor's grasp (and the worst detention ever) in this all-new adventure from Eisner Award winner Dustin Nguyen and Eisner Award nominee Derek Fridolfs.
Derek Fridolfs