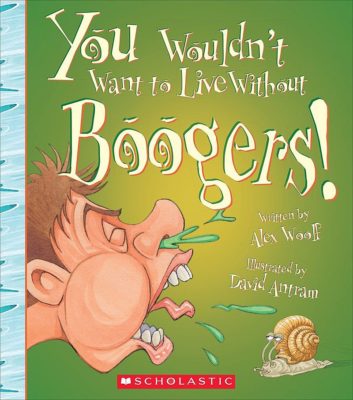 You Wouldn't Want to Live Without Boogers!

This series takes readers (Ages 8-12) on a historical journey, examining how people coped in the past and how they developed ingenious ways to make life safer and less unpleasant. Each book features full-color cartoon-style illustrations and hilarious speech bubbles to heighten interest, making the series attractive even to reluctant readers.

We would also quickly become sick, because mucus protects us from dirt in the air that we breathe. But what exactly is this sticky, slimy stuff we call mucus? What's it made of? Is it the same thing as snot? Why do we produce more of it when we have a cold? And what do animals like slugs and snails do with their mucus? You might find it a bit gross, but you wouldn't want to live without snot!
David Antram