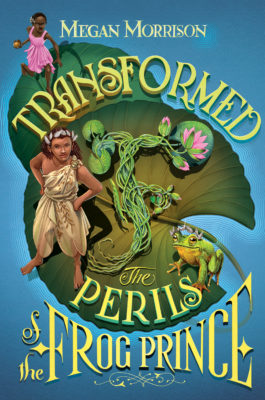 Tyme #3: Transformed: The Perils of the Frog Prince

Syrah Huanui is a frog. He wasn't always one--once he was a Prince of the Olive Isles, a champion launchball player, a beloved favorite of all.

Or so he thought! After accidentally (OK, intentionally) letting a love letter from the cloying Deli Gourd get published for everyone to read, his fed-up family kicks him out. And an unfortunate encounter with a Wishing Well leaves him trapped in the body of a frog, with no hope of transforming back.

A year later, Syrah finds himself in Yellow alongside who else: Deli. A sudden, deadly plague has started to run through the country, right before a crucial election for Governor. Syrah isn't sure he'll ever become himself again, or if anyone will ever realize that it's HIM in there, but he is sure he might be able to help stop whatever evil is going on...
Megan Morrison

Megan Morrison is a middle-school drama teacher and a writer. She cofounded the Harry Potter fanfiction site the Sugar Quill, and has been developing the world of Tyme since 2003. She lives near Seattle, Washington, with her family. Please visit her website at www.meganmorrison.net and her blog at makingtyme.blogspot.com, and follow her on Twitter at @megtyme.