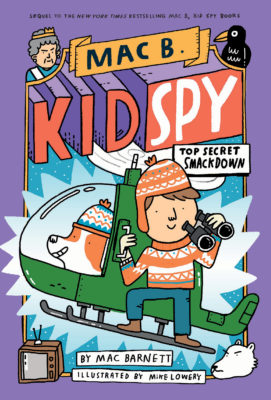 Ravens have been stolen from the Tower of London! Mac B.'s top-secret mission? Travel to Iceland and retrieve the ravens... or Britain is ruined!

In Iceland, Mac discovers secret submarines, hungry polar bears, mysterious blueprints... and his old archnemesis! Is the KGB man behind this birdnapping? Can Mac get the ravens to safety? It's time for an epic, top secret smackdown between these two secret agents! With full-color illustrations on every page and fascinating historical facts woven throughout, this series offers adventure, intrigue, absurdity, history, and humor. Catch the latest in the totally smart and sidesplittingly funny series, Mac B., Kid Spy.
Mac Barnett

Mac Barnett is the author of several books for children, including Extra Yarn, illustrated by Jon Klassen, a Caldecott Honor Book and winner of a Boston Globe-Horn Book Award; The Wolf, the Duck, and the Mouse, a New York Times bestseller; and Sam and Dave Dig a Hole, a Caldecott Honor Book and winner of the E. B. White Read Aloud Award, and The Important Thing About Margaret Wise Brown. He is the co-author, with Jory John, of the New York Times bestselling series The Terrible Two. Mac lives in California.

Mike Lowery is an illustrator whose work appears in everything from greeting cards to children's books. He is the creator of the Doodle Adventures series and the Everything Awesome About series, and the illustrator of the Gingerbread Man on the Loose and Mac B., Kid Spy series, and more. Find out more at mikelowery.com and on Instagram, @mikelowerystudio. He lives with his wife and two children in Atlanta, Georgia.