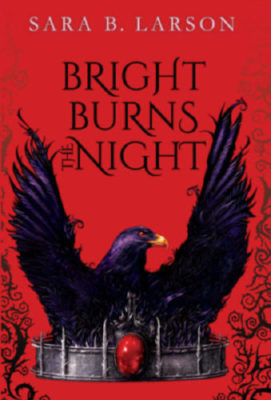 by Sara B. Larson

Ten years ago, King Lorcan of the Dark Kingdom Dorjhalon defeated Queen Evelayn and cut her conduit stone from her. Since then, he has kept her trapped in her swan form. With the loss of balance between Dark and Light, winter has descended and the Draíolon of Éadrolan lose more power every day. But once a year, Lorcan transforms her back to her Draíolon form and offers a truce. And every year Evelayn refuses -- for he requires her to Bind herself to him for life.

But now, with an Ancient power bearing down upon them, everything may change. Evelayn will learn that the truths she once believed have shattered, and that she may need her enemies even more than her allies. Lorcan and Evelayn become partners in a desperate quest to return the balance of power to Lachalonia. How far will this partnership go? Can friendship -- perhaps even love -- bloom where hatred has taken root?

Sara B. Larson delivers a thrillingly romantic and hauntingly satisfying end to this extraordinary duology.
Sara B. Larson

Sara B. Larson is the author of the acclaimed young adult fantasy Defy trilogy: Defy, Ignite, and Endure; and Dark Breaks the Dawn, the first book of a duology. She can't remember a time when she didn't write books -- although she now uses a computer instead of a Little Mermaid notebook. Sara lives in Utah with her husband and their children. When she's not mothering or writing, you can often find her at the gym repenting of her sugar addiction. You can visit her online at SaraBLarson.com.

"And whose fault is that?" she broke in angrily. "You speak to me as if I should take responsibility for what has happened to Lachalonia."

He ignored her barb and continued, "Your Draiolon are nearly without power. If you won't do it for Eadrolan or for yourself, do it for them."

Evelayn jumped to her feet, the pain and weakness receding in the face of her fury. "How dare you pretend to be concerned about what your actions have done to my kingdom -- to my Draiolon. You did all of this. I should have killed you when I had the chance."

Lorcan gazed at her coolly, one eyebrow lifted as if he found her amusing, but his hands clenched into fists. "Then do it now, my queen," he taunted. "Kill me and end this. Perhaps it would be a relief."

"Don't mock me," Evelayn snapped back. "You know I don't have the power, or I would have long ago. Just as I killed Bain."

His mouth twisted as if he'd tasted something sour. "Oh, yes, your great triumph."

"Yes, my triumph. Right before my worst failure -- giving you the chance to make that vow and believing you'd actually work with me to establish and maintain peace. You're no better than your father."

Lorcan's eyes narrowed and he took a step closer. "Don't pretend to understand me or my choices. And never compare me to my father ever again."

The cold fury in his voice and the crackle of the ground around his feet turning to ice was enough to make Evelayn close her mouth and swallow the furious retort she'd nearly spat at him, all too aware of the fact that despite his farce of an offer, he truly held all the power.