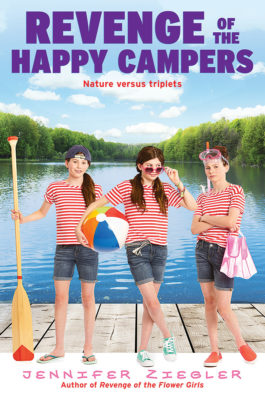 Revenge of the Happy Campers (The Brewster Triplets)

The Brewster triplets, Dawn, Darby, and Delaney, would usually be thrilled to spend a week with their beloved Aunt Jane. She's fun and fearless and fascinating, and she loves to hang out with them. But Aunt Jane is taking the girls somewhere they've never been before . . . camping!

It's one disaster after another, whether they're sinking canoes in the lake at the run-down campground, being attacked by fire ants, or failing to pitch a tent that stays upright. Worst of all, they meet a group of boys who think that their oldest brother is going to be president one day - when clearly, that's Dawn's destiny. Before they know it, the Brewster triplets are caught up in the girls-versus-boys Great Camping Challenge . . . only some are more eager to win than others. Can they beat the boys, prove to Aunt Jane that they really are happy campers, and not get into a horrible sister fight?

Like the Brewster triplets, Jennifer Ziegler is a native Texan and a lover of family, history, barbecue, and loyal dogs. Although she only has one sister, she does know what it is like to have four kids living in the same house. She is the author of several books for young people, including Sass & Serendipity and How Not to Be Popular. Jennifer lives in Austin, Texas, with her husband, author Chris Barton, and their four children.