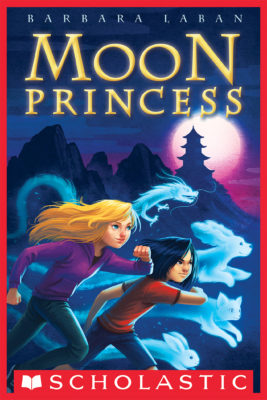 Sienna is unhappy. Her mother has disappeared and she feels alone in Shanghai. Her only friend is Rufus--a sarcastic invisible dog with a VERY clear idea of how things should be done.

When their mean housekeeper starts acting suspiciously, Sienna decides to investigate. She follows a trail of clues that leads her to a new friend, Feng, who also has an invisible animal friend and has lost a family member. Together they embark on a hunt through China that leads them to new friends, even more invisible animals, and a mysterious moonlit temple where Sienna's mother and Feng's brother were last seen.

Are the disappearances linked to a priceless statue of the famous moon princess? And can they discover the dangerous truth?
Barbara Laban

Barbara Laban went to university in Munich, London and Taipei and graduated in Far Eastern Studies. She left her home country Germany fifteen years ago and worked as a study coordinator and acupuncturist in a centre for Traditional Chinese Medicine in Amsterdam. She loves learning new languages and ever since she wrote her first Chinese character makes every effort to speak the language, but still has room to improve.

When her two daughters were born, she started to translate texts about Traditional Chinese Medicine and soon had the idea to write a childrens' novel set in China. In 2011 she won the German version of the Times/Chicken House Children's Fiction Competition with her first book Moon Princess. She has not stopped writing since and so far published two more children's books in Germany.

She lives with her husband, daughters and two guinea pigs in London.