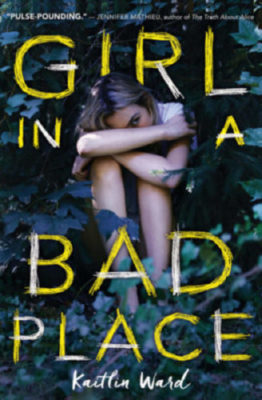 Girl in a Bad Place

Mailee and Cara take care of each other. Mailee is the star of the high school plays; Cara is the stage manager. Mailee can't keep her life together; Cara has enough organizational skills for the both of them.

So when the girls are invited to visit the Haven, a commune in the mountains near their suburban Montana homes, it seems like an adventure. Until Cara starts spending every waking minute there... and Mailee thinks it's creepy, almost like a cult. When Cara decides she's going to move to the Haven permanently, Mailee knows it's a bad idea. But how far will she go to save her best friend... from herself?
Kaitlin Ward

Kaitlin Ward grew up on a dairy farm in a tiny New Hampshire town, the same town where she lives now with her husband and son. She studied animal science at Cornell University and cofounded the well-known blog YA Highway. She is also the author of Where She Fell, Girl in a Bad Place, and Bleeding Earth. Find her on Twitter at @Kaitlin_Ward.