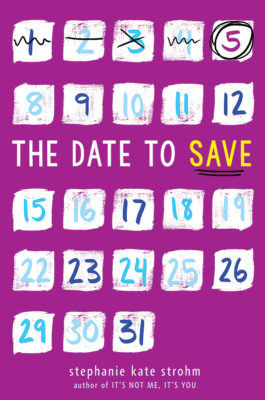 The Date to Save

BROOKS MANDEVILLE, quarterback: Friday is the homecoming game and dance. It is a very big deal.

TANNER ERICKSEN, sophomore class candidate for vice president: Holly has to win the election for class president this Friday!

HOLLY CARPENTER, cheerleader, Academic Battle team member, class president candidate: Friday? Everything is on Friday? How can I be in three places at once?

COLIN VON KOHORN, editor-in-chief of the Prepster: This kind of scheduling incompetence could only have come straight from the top.

ANGELICA HUTCHERSON, reporter-at-large: I talked to everyone and my article is going to crack this story wide open...

This is what happens on the wildest day in the history of high school!
Stephanie Kate Strohm

Stephanie Kate Strohm is the author of It's Not Me, It's You; The Taming of the Drew; Pilgrims Don't Wear Pink; Confederates Don't Wear Couture; and Prince in Disguise. She grew up on the Connecticut coast, where a steady diet of Little House on the Prairie turned her into a history nerd at an early age. After graduating with a joint major in theater and history from Middlebury College, she acted her way around the country, performing in more than 25 states. Although she was born in New York, she currently lives in Chicago, and doesn't discriminate against any type of pizza. When she's not writing, she loves baking, walking her dog Lorelei, taking dance cardio classes too seriously, and playing board games with her husband.