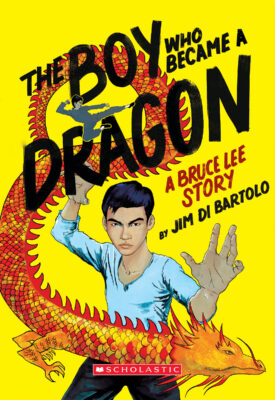 Boy Who Became a Dragon, The : A Biography of Bruce Lee

Bruce Lee was born on November 27, 1940 - in both the hour and the year of the dragon. Almost immediately, he was plunged into conflict: as a child in Hong Kong as it was invaded and occupied by the Japanese; as the object of discrimination and bullying; and as a teenager grappling against the influence of gangs.

As the world knows, Lee found his salvation and calling through kung fu - first as a student, then as a teacher, and finally as a global star. The Boy Who Became a Dragon tells his story in brilliant comic form.

Jim Di Bartolo is a mixed-media illustrator, painter, and visual storyteller. In his freelance career he has illustrated novels, comic books, and role-playing games. He and his wife, the author Laini Taylor, have collaborated on several books, and their most recent joint effort, Lips Touch: Three Times, was a National Book Award finalist. He lives in Portland, Oregon, with his wife and their daughter, and can be found online at jimdibartolo.com. Chances are, he probably could use more sleep.