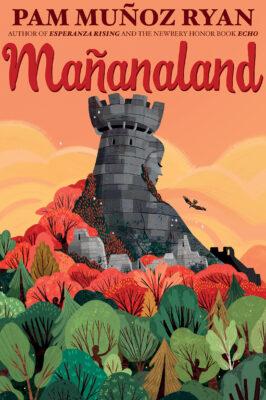 * "Another unforgettable work from a master storyteller." -- Booklist, starred review

"A gem of a story with timely messages." -- School Library Journal

"Rich and relevant." -- The Horn Book

"Mañanaland is that rare gift of a book." -- Francisco X. Stork, award-winning author of Disappeared

Maximiliano Córdoba loves stories, especially the legend Buelo tells him about a mythical gatekeeper who can guide brave travelers on a journey into tomorrow.

If Max could see tomorrow, he would know if he'd make Santa Maria's celebrated fútbol team and whether he'd ever meet his mother, who disappeared when he was a baby. He longs to know more about her, but Papá won't talk. So when Max uncovers a buried family secret--involving an underground network of guardians who lead people fleeing a neighboring country to safety--he decides to seek answers on his own.

With a treasured compass, a mysterious stone rubbing, and Buelo's legend as his only guides, he sets out on a perilous quest to discover if he is true of heart and what the future holds.

This timeless tale of struggle, hope, and the search for tomorrow has much to offer today about compassion and our shared humanity.