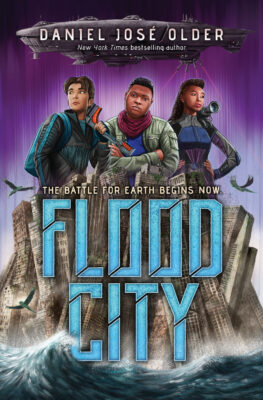 Welcome to Flood City, the last inhabitable place left above the waters that cover Earth. It's also the last battleground between the Chemical Barons, who once ruled the planet and now circle overhead in spaceships, desperate to return, and the Star Guard, who have controlled the city for decades.

Born and raised in Flood City, Max doesn't care about being part of either group. All he wants is to play his music with the city band, keep his sister from joining the Star Guard, and be noticed by his crush, the awesome drummer Djinna.

Meanwhile, Ato, a young Chemical Baron, has joined his crew for what was supposed to be a routine surveillance mission, only things go from bad to worse between unexplained iguanagull attacks and the discovery of deadly schemes. Ato's just trying to stay safe, keep his twin brother alive, and not hurt anyone. So when his commander prepares to wipe out Flood City completely, Ato must decide just how far he'll go.

As Max's and Ato's paths collide, it changes everything. Because they might just be able to stop a coming war. But can two enemies work together to save Earth?
Daniel José Older