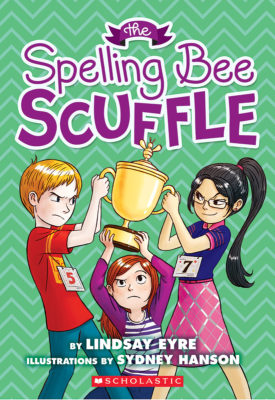 Cherry Hill Elementary has always had two baseball fields, one for Sylvie Scruggs's fourth-grade-and-under friends, and one for Jamie Redmond's fifth-grade crew. When Jamie's field is demolished for a kindergarten playground, the fifth graders want to take over the fourth-grade space. Finally, Sylvie and Jamie make a bet: Whoever wins the school spelling bee wins the baseball diamond too. Sylvie knows her friend Miranda will be the champion, no question, and the field will be safe for her team.

But then Josh Stetson beats Miranda in the class bee, which means he'll compete against the fifth-graders for the school title. As Sylvie tries to help Josh prepare for the big event, friendships get strained, secret deals get made, and matters spin WAY out of control. How far will Sylvie go to win the field for her friends?
Lindsay Eyre

Lindsay Eyre received an MFA in Creative Writing for Children and Young Adults from the Vermont College of Fine Arts. She now lives with her husband and their five children in the fine and sweaty city of Cary, North Carolina. Please visit her website at www.lindsayeyre.com and follow her on twitter at @lindsayeyre.

Some of the class cheered, but many of us did not. This was not because we didn''t like spelling bees -- spelling bees are always great, because if they last long enough, we don''t have to do math. No, we didn''t cheer because of the bet. Whoever won the class bee would go to the school spelling bee, and the future of baseball rested upon their spelling shoulders. No one wanted to have those shoulders.

I was one of the cheerers, because I wasn''t worried. Miranda would win the spelling bee' - ! ' the fifth graders would have to play hopscotch at recess, which would be funny' - ! ' and everything would be just fine. Forever.

"Everyone line up!" Ms. Bloomen said. "That''s right, over there. Near the windows. No jostling. Everyone be respectful!"

Nobody was respectful and everyone jostled, because no one wanted to go first. Most of the time our class was not very unified, but in this, we were awesomely one.

Ms. Bloomen began anyway. She started with really easy words like "across," "again," and "cellar."

"Aren''t there?" Marcie said, even though she is one of the smartest girls in the room.

The spelling bee went on. People were dropping like flies that didn''t know how to spell.

Within minutes, only four people were left: me, Miranda, Georgie, and Josh. Miranda and Josh both looked like they were going to throw up the alphabet. Come on, Miranda! I thought at her. You can do this! This is easy for you!'