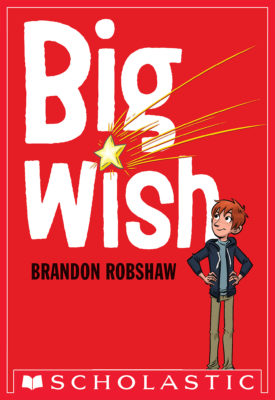 Eleven-year-old Sam has a problem. Well, quite a few problems. So when he sees a shooting star, he naturally wishes on it -- for a million wishes. Of course, he doesn't expect the wish to come true, but somehow it does. Sam has fun experimenting with wishes -- he can change anything he wants. But when he discovers that changing things has consequences that aren't always good, he begins to think again.
Brandon Robshaw

Brandon Robshaw has written several books for children, including some under the name of Adam Blade for the Beast Quest and Sea Quest series. He studied English literature at Oxford University before becoming a schoolteacher and university lecturer. Brandon lives in East London with his wife, three children, and dog.

--- - Dad pointed upward. "Look!"
A bright silver streak was moving across the velvety blue sky.
"Is that a shooting star?"
"That's right."
"Can you make a wish on it?"
Dad laughed. "Well, that's the story. It's really just a meteor, burning up as it hits Earth's atmosphere. A chunk of rock from space. So I don't quite see how it could grant wishes . . ."
"Well, I'm going to wish," I said. "You never know!"