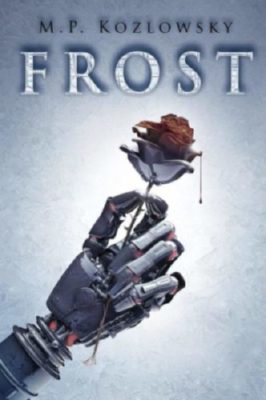 16-year-old Frost understands why she's spent her entire life in an abandoned apartment building. The ruined streets below are hunting grounds for rogue robots and Eaters.
She understands why she's never met a human besides her father. She even understands why he forbids her to look for medicine for her dying pet. But the thing is, it's not her real father giving the orders . . .

Before he died, Frost's father uploaded his consciousness into their robot servant. But the technology malfunctioned, and now her father fades in and out. So when Frost learns that there might be medicine on the other side of the ravaged city, she embarks on a dangerous journey to save the only living creature she loves.

With only a robot as a companion, Frost must face terrors of all sorts, from outrunning the vicious Eaters. . .to talking to the first boy she's ever set eyes on. But can a girl who's only seen the world through books and dusty windows survive on her own?
M. P. Kozlowsky

M.P. Kozlowsky is the author of two middle-grade novels, Juniper Berry and The Dyerville Tales. Frost is his first novel for Young Adults. He lives in Westchester, New York, with his wife and two daughters.

--- - ! "The sounds grew louder. Frost closed her eyes. She wasn't ready.
\tThe footsteps ceased. With a creak, the door slowly opened. And there, standing before her, was a robot.
\t\"Dad?\"
\t\"No.\"
\tFrost exhaled, a mixture of disappointment and relief. \"Bunt. You were gone so long, you had me worried.\"
\t\"It is becoming more and more difficult to find supplies, Frost. And there are more and more dangers to evade.\" Bunt bent down and lowered his box of loot to the ground, then, on one knee, he placed a hand on Romes. The broot did not stir beneath the metallic touch. \"He is getting worse.\"
\t\"You're supposed to tell me he's getting better.\"
\t\"I do not lie. You know that. Your broot is dying. He has a month of life left. \ Two at most.\"
\t\"I was sick too, once. Don't you remember? I used to always be sick when I was little. Dad told me so. He said it was bad, very bad. Worse than Romes. And, look, I got better.\"
\t\"The Broot will not.\"
The brutal honesty was too much for Frost, and her eyes filled with tears. It was a day she had been dreading for years, and all she wanted to hear was that there was hope, just a glimmer of hope. \"I wish my Dad were here. He would never say such things to me. He would comfort me.\"
\t\"Alas…\"
\t\"Alas… Alas… What do you think you are, Bunt? You're not human, Bunt. Never will be.\""