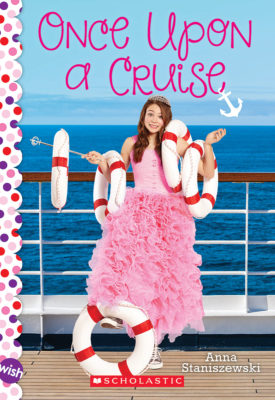 Once Upon a Cruise: A Wish Novel

Ainsley never wanted to spend her summer on a fairy tale cruise--especially since, instead of lounging by the pool, she's running around the ship doing favor after favor for her cruise director mom.

Things aren't all bad--it's good to see her mom acting confident again after the divorce, and she's learning a lot about obscure German fairy tales and how to fold towels into entertaining shapes for little kids (um, yay?). There's also a guy who's super cute, even in a dorky dwarf costume--if only Ainsley could get Prince Handsome to stop babbling about himself long enough for her to say more than 'hi' to the cute dwarf!

But once the cruise starts, things start to go wrong: the laundry turns pink, the kitchen runs out of food, the guy playing the Pig King is always in Ainsley's hair, and her mom expects her to be in a hundred places all at once. Is this fairy tale cruise under a wicked curse? Or can Ainsley stand up for herself and make the cruise end happily ever after?
Anna Staniszewski

Born in Poland and raised in the United States, Anna Staniszewski grew up loving stories in both Polish and English. She was a Writer-in-Residence at the Boston Public Library and a winner of the PEN New England Susan P. Bloom Discovery Award. Anna lives outside of Boston, Massachusetts, and teaches at Simmons College. When she's not writing, Anna spends her time reading, eating chocolate, and challenging unicorns to games of hopscotch. You can visit her at annastan.com.