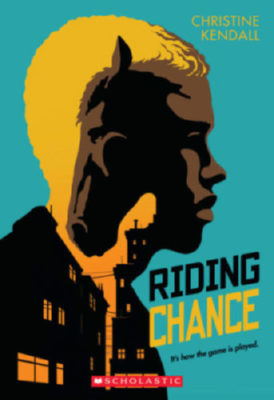 Troy is a kid with a passion. And dreams. And a desire to do the right thing. But after taking a wrong turn, he's forced to endure something that's worse than any juvenile detention he can imagine -- he's been "sentenced" to the local city stables where he's made to take care of the horses and learn to play polo. The greatest punishment has been trying to make sense of things after his mom died. Troy's also figuring out which friends have his back, which kids to cut loose, and whether he and Alisha have a true connection. Laced with humor and beating with heartache, this novel will grip readers, pull quickly, and take them on an unforgettable ride.

Set in modern Philadelphia, Christine Kendall's stunning debut lets us come face-to-face with the challenges of a loving family that helps turn hardships into a horse of a different color.
Christine Kendall

Christine Kendall is the author of the award-winning novel Riding Chance, which was nominated for a NAACP Image Award in the category of Outstanding Literary Work for Youth/Teens. Rita Williams Garcia called it a “promising debut” and Sharon Flake called it “a heartwarming tale of redemption.” Christine’s short fiction has appeared in numerous publications. She lives in Philadelphia, PA

--- - See, the flow's the thing. You know, we all got our swagger when we're on the block. Don't take no stuff from the fellas, profiling for the ladies. Well, same thing when I'm up on that horse. I got my moves and my horse got hers. It's the flow that first grabbed me. It sure wasn't what I expected. After what happened, me and my boy, Foster, were just trying to keep it all together. Especially me. I was messed up -- confused pretty bad -- but I couldn't tell anybody. Not Foster, not my family, nobody.