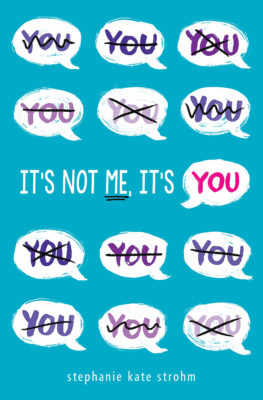 COCO KIM, best friend: Avery has never been dumped! Well, okay, except for this one time.

BIZZY STANHOPE, officially the worst: The head of the prom committee doesn't have a date to the prom. It is beyond pathetic.

JAMES "HUTCH" HUTCHERSON, lab partner: Did Avery really swear off dating until she discovers why her relationships never work out? I'll believe that when I see it.

ROBBY MONROE, ex-boyfriend: Did you get interviewed by Avery Dennis for her project?

AVERY DENNIS: recently dumped/topic of much gossip: Okay. Everyone is talking about it, so let's talk about it...

Stephanie Kate Strohm is the author of It's Not Me, It's You; The Taming of the Drew; Pilgrims Don't Wear Pink; Confederates Don't Wear Couture; and Prince in Disguise. She grew up on the Connecticut coast, where a steady diet of Little House on the Prairie turned her into a history nerd at an early age. After graduating with a joint major in theater and history from Middlebury College, she acted her way around the country, performing in more than 25 states. Although she was born in New York, she currently lives in Chicago, and doesn't discriminate against any type of pizza. When she's not writing, she loves baking, walking her dog Lorelei, taking dance cardio classes too seriously, and playing board games with her husband.