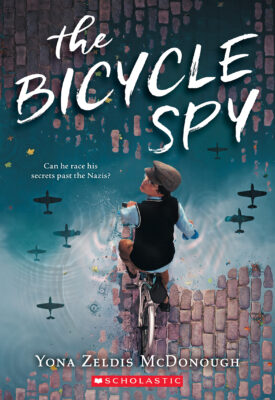 Marcel loves riding his bicycle, whether he's racing through the streets of his small town in France or making bread deliveries for his parents' bakery. He dreams of someday competing in the Tour de France, the greatest bicycle race. But ever since Germany's occupation of France began two years ago, in 1940, the race has been canceled. Now there are soldiers everywhere, interrupting Marcel's rides with checkpoints and questioning.

Then Marcel learns two big secrets, and he realizes there are worse things about the war than a canceled race. When he later discovers that his friend's entire family is in imminent danger, Marcel knows he can help -- but it will involve taking a risky bicycle ride to pass along covert information. And when nothing ends up going according to plan, it's up to him to keep pedaling and think quickly... because his friend, her family, and his own future hang in the balance.

Yona Zeldis McDonough is the award-winning author of 27 books for children and seven novels for adults. Her essays, articles, and short fiction have appeared in numerous national and literary publications. She is also the fiction editor of Lilith magazine. McDonough lives in Brooklyn with her husband and their two children.

Marcel read the note once, twice, and then a third time. Picnics, bridges... what could it mean? Why hide a message about a picnic in a loaf of bread? Unless... maybe it was a code of some kind.

The Germans had invaded the Free Zone about two weeks ago. Marcel's father had sent him to his aunt's with bread several times since then. He'd never thought anything of it -- he'd been delivering bread for them since he was eight or nine. But going multiple times in only two weeks was way more than usual.

The trips he had made recently must have been about more than just delivering bread or pastries. Much more...