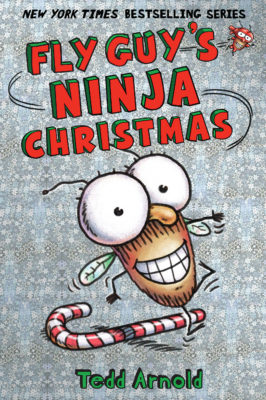 In the new book in Tedd Arnold's New York Times bestselling Fly Guy series, it's Christmazzz Eve and Fly Guy doesn't have a present to give his best friend, Buzz. But when he goes out to look for one, Fly Guy meets a stranger in the house whom he has to fight off with his ninja action. Will Fly Guy defeat the stranger? Will he find a present for Buzz?

Even reluctant readers will enjoy this fun, zany holiday story about Fly Guy meeting Santa Claus, knocking over the Christmas tree, and showing off his ninja moves!

Tedd Arnold is the bestselling author and illustrator of the Fly Guy series, Green Wilma, Parts, and other popular picture books. He is also the illustrator of Detective Blue. He has received Theodor Seuss Geisel Honors for Hi! Fly Guy and I Spy Fly Guy! Tedd lives with his wife, Carol, in Florida.