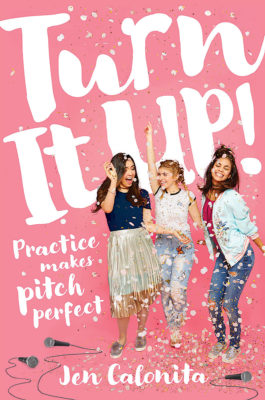 The Nightingales are in a serious funk.
Bradley Academy's all-girl a cappella group used to be the pride of the sunshine state, but the Nightingales have recently fallen out of harmony.
Best friends and co-captains Lidia Sato and Sydney Marino haven't been speaking ever since a boy came between them. And not just any boy-none other than Griffin Mancini, the lead singer of Bradley Academy's smug all-boy a capella group, the Kingfishers.
The Nightingales have no chance of making it to the big state final if their captains are at each other's throats. Their only hope is new girl Julianna Ramirez. But in addition to her serious pipes, she has some serious stage fright.
The Nightingales will have to come together if they want to shine at the upcoming competition and restore the group to its former glory.
Turn It Up! follows Lidia, Sydney, and Julianna through the ups and downs of friendship, romance, competition, and finding the perfect song!
Jen Calonita

Jen Calonita graduated from Boston College where she majored in communications. This degree helped her land a job at a teen magazine where she got to interview several of her favorite movie and music stars! These days, Jen writes books for teens, including the Secrets of My Hollywood Life series. When she isn't working, Jen loves going running, taking pictures, and hanging out with her husband and two boys at their home on Long Island in New York. She also enjoys going on walks with her feisty Chihuahua named Jack, where she does her best brainstorming for whatever project she's working on next. You can find her online at www.jencalonitaonline.com.