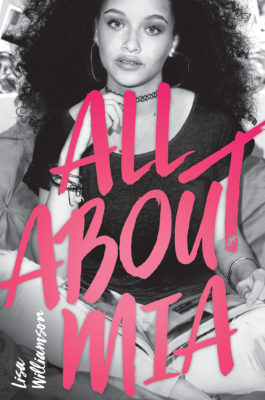 "That girl is such a mess." "Why can't she be like her sisters?"

Blah, blah, blah. That's all Mia Campbell-Richardson ever hears. From her parents, her teachers, and her never-do-wrong older sister, Grace.

So what if she parties too hard and studies too little? Who cares if she tends to end up with the wrong guys or says the wrong things at the wrong times? She's still a good friend (except when she isn't). And she still knows the way things should go (except when they don't).

When Grace comes home with shocking news, Mia hopes that it's finally Grace's turn to get into trouble. But instead it's Mia whose life spirals out of control.

If you've ever said something you later regretted (likely), accidentally broken a friend's heart (possibly), or ruined a wedding in spectacular fashion (hopefully you haven't), All About Mia will make you laugh, cry, cry-laugh, and laugh-cry in recognition that life is sometimes most entertaining when it's at its most unfair.
Lisa Williamson

Lisa Williamson was born and grew up in Nottingham. She studied drama at Middlesex University and since graduating has worked as an actor on stage and TV. Between acting jobs Lisa temped in offices across London, typing stories when no one was looking, one of which eventually became her debut novel The Art of Being Normal. Lisa now lives in North London with her boyfriend.

Everyone in Rushton knows the Campbell-Richardson sisters.

Grace is the oldest and destined for a first from Cambridge. Signature scent: grapefruit shampoo, secondhand books, and perfection.

Audrey is the youngest and destined for the Olympics. Signature scent: chlorine, Lucozade Sport, and discipline.

Then there''s me, Mia. I''m in the middle. I have no idea what my destiny is. Signature scent: coconut oil, Haribo, and TROUBLE.'