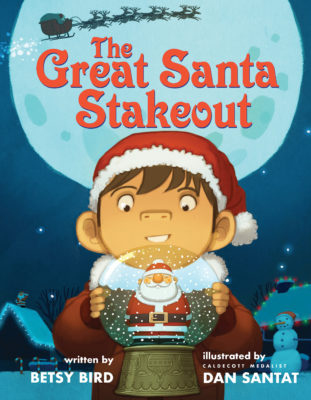 Freddy Melcher is Santa's #1 Fan. He has Santa posters, Santa action figures, and even Santa underwear. But there is one prize Freddy desperately wants: A photograph taken with Santa, fresh out of the chimney.

Oh, is it risky! It's awfully hard to sneak anything by someone who can see you when you're sleeping and knows when you're awake. That's why Freddy has been extra good this year . . . at hiding his plans.

Will Freddy get away with his delightfully devious scheme to outwit Santa Claus himself and capture the ultimate selfie?
Betsy Bird

As a kid, Betsy Bird was incredibly shy, she wasn't good at sports, and she wasn't exactly the best artist in the world, but there was one thing she could do really well: read. She read comic strips and novels and comic books and picture books and magazines and pretty much anything she could get her hands on. When she grew up she became a children's librarian so she could work with books all day every day. She is also the author of Giant Dance Party, with illustrations by Goosebumps artist Brandon Dorman. Betsy was born in Kalamazoo, Michigan, and now resides in Evanston, Illinois with her husband and offspring. Visit her at betsybirdbooks.com.