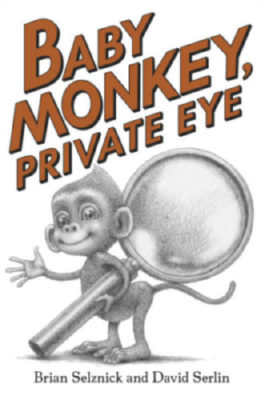 Who is Baby Monkey?

He is a monkey.

He is Baby Monkey, Private Eye!

if he can put on his pants!

Baby Monkey's adventures come to life in an exciting blend of picture book, beginning reader, and graphic novel. With pithy text and over 120 black and white drawings accented with red, it is ideal for sharing aloud and for emerging readers.

David Serlin is a writer, editor, and historian who teaches at the University of California, San Diego. He is the author or editor of numerous books and articles for adults, as well as the co-author of the highly acclaimed Baby Monkey, Private Eye.