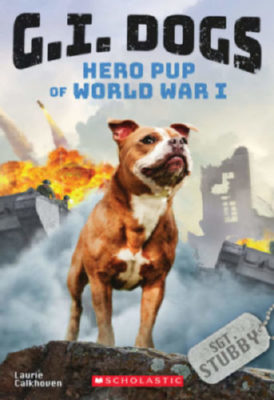 Meet Stubby: a stray pup who was taken in by a group of American soldiers-in-training and soon found himself whisked off to the frontlines of World War I as the official mascot of the 102nd Infantry Regiment! Stubby served bravely by his soldiers' sides for 18 months and became a hero when he saved his regiment from a surprise gas attack, and again when he singlehandedly caught an enemy German soldier in No Man's Land.

Join Stubby on his incredible journey from puppy to soldier to high-ranking sergeant as he narrates his story of heroism. This "dog's-eye view" takes readers into the heart of the action of WWI and will leave you cheering for Stubby and his human companions as they overcome countless obstacles and prove time and again why a dog really is man's best friend.
Laurie Calkhoven