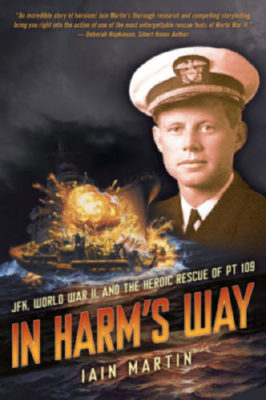 In September 1941, young Jack Kennedy was appointed an Ensign in the U.S. Naval Reserve. After completing training and eager to serve, he volunteered for combat duty in the Pacific and was appointed commander of PT 109.

On August 2, 1943, Kennedy's PT 109 and two others were on a night mission to ambush an enemy supply convoy when they were surprised by a massive Japanese destroyer. The unsuspecting Americans had only seconds to react as the Japanese captain turned his ship to ram directly into Kennedy's. PT 109 was cut in half by the collision, killing two of Kennedy's 12 crewmen and wounding several others in the explosion.

In Harm's Way tells the gripping story of what happened next as JFK fought to save his surviving crew members who found themselves adrift in enemy waters. Photographs round out the exciting narrative in the first book to cover this adventurous tale for young readers.
Iain Martin

Iain Martin graduated with an MA in American History from Southern Connecticut State University in 2000. He is the author of seven nonfiction books. Martin's most recent title (and his first book written for teens), Gettysburg: The True Account of Two Young Heroes in the Greatest Battle of the Civil War, was a 2013 VOYA pick for Best Nonfiction.