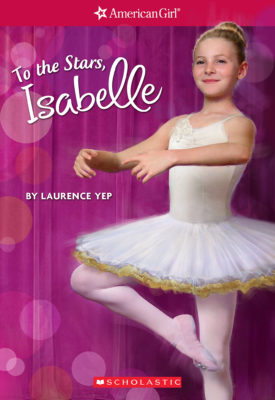 Series: Girl of the Year

Isabelle is doing great at the Anna Hart School of the Arts--her dancing idol Jackie Sanchez even invites her to go on tour! Isabelle jumps on board, but she quickly finds that the traveling show has its challenges, not the least of which is bossy Renata who was invited to come, too. When the dance show suddenly starts falling apart, Isabelle tries to help Jackie pull it back together--and begins to learn more about a mentor who encouraged Jackie to dance as a young girl. As Isabelle taps into her talents to try to save the show, she not only discovers who inspired Jackie, but also how she, herself, can inspire those around her.

Laurence Yep is the acclaimed author of more than sixty books for young people, including THE JOUNRAL OF WONG MING-CHUNG, A CHINESE MINER; the Newbery Honor Books DRAGONWINGS and DRAGON'S GATE from the Golden Mountain Chronicles; The Tiger's Apprentice trilogy; THE DRAGON AWAKES: THE SAN FRANSCISCO FIRE OF 1906; and THE DRAGON'S CHILD: A STORY OF ANGEL ISLAND, which he cowrote with his niece, Dr. Kathleen S. Yep.

Mr. Yep lives in Pacific Grove, California, with his wife.