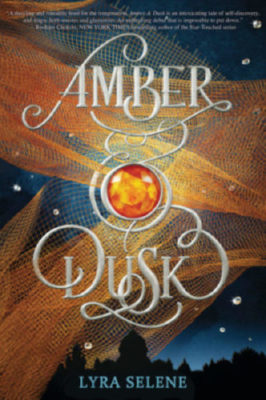 Sylvie has always known she deserves more. Out in the permanent twilight of the Dusklands, her guardians called her power to create illusions a curse. But Sylvie knows it gives her a place in Coeur d'Or, the palais of the Amber Empress and her highborn legacies.

So Sylvie sets off toward the Amber City, a glittering jewel under a sun that never sets, to take what is hers.

But her hope for a better life is quickly dimmed. The empress invites her in only as part of a wicked wager among her powerful courtiers. Sylvie must assume a new name, Mirage, and begin to navigate secretive social circles and deadly games of intrigue in order to claim her spot. Soon it becomes apparent that nothing is as it appears and no one, including her cruel yet captivating sponsor, Sunder, will answer her questions. As Mirage strives to seize what should be her rightful place, she'll have to consider whether it is worth the price she must pay.

Lyra Selene was born under a full moon and has never quite managed to wipe the moonlight out of her eyes. When she isn't dreaming up fantastical cities and brooding landscapes, Lyra enjoys hiking, rainstorms, autumn, and pretending she's any good at painting. She lives in New England with her husband, in an antique farmhouse that's probably not haunted. Amber & Dusk was her debut novel.

--- - ! 'I wasn''t highborn. Or if I was, whoever sired me disowned me, dumping me in the shadows at the edge of the world like I was worthless. The thought stoked the ember of rage burning always within me, a bright kernel hard and polished as a ruby.

When I opened my hands illusions spilled out, beautiful and terrible and impossible to control.

Trees of kembric, draped in garlands of jewels.

I wasn''t worthless. I wasn''t an aberration, a freak, a monster. I was a legacy.

I ran away from the Temple of the Scion because I knew I deserved better than merely being tolerated. Much as I''d tried to follow in their footsteps when I was young, I had never belonged with the Sisters, and they had certainly never loved me. They had taught me many things: that to laugh too loudly in the presence of the Scion was a sin, and that the bruises and scrapes inflicted by the ignorant village kids were my own fault, and that dreaming of anything outside the dank walls of the temple was too dangerous to be allowed.

They had taught me that being alive was not the same thing as living.

They had tried to stop me from leaving, when I finally fled. They had burned the Imperial Insignia and tried to lock me in my room, panic churning their studied tranquility into chaos. But I''d escaped. Jagged satisfaction tinged with guilt burned through me when I remembered how I''d repaid a lifetime of their indifference.

But I deserved the chance to find where I belonged. To find a world where my gift -- my legacy -- did not frighten superstitious Sisters or enrage cruel children. To find a world forged in sunlight and honed on dreams, as perilous and intoxicating as the colors spilling jewel-bright from my fingertips.'