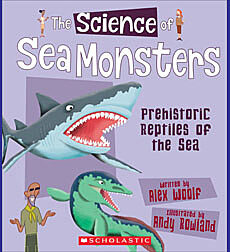 Science of Sea Monsters, The : Prehistoric Reptiles of the Sea

Series: The Science of...

The first dinosaurs were small meat-eaters, or carnivores, that snapped up bugs and other small creatures. Then some dinosaurs started eating plants. They were herbivores. Over millions of years, bigger and bigger dinosaurs evolved. The plant-eaters, or herbivores, were the biggest by far. Some of them were really awesome giants more than 30 metres (100 ft) long, and standing taller than a house. They were the biggest creatures that have ever lived on land.
Alex Woolf