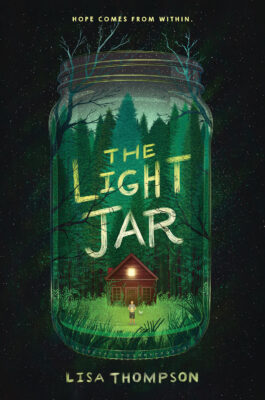 Nate and his mother are running away. Fleeing from a bad situation at home, they hide out in an abandoned cottage in the middle of a forest. Though it's old and run-down, at least it's a place of their own.

Then Nate's mother heads off for groceries and doesn't return. Has she run into trouble, or simply abandoned him? He is left alone and afraid, with the dark -- and all his old fears -- closing in on him.

But comfort can come from the most unexpected of places: like a strange girl trying to solve the mystery of a treasure hunt, and the reappearance of a friend from his past. Will Nate find the bravery he needs to face down his fears, survive on his own, and ultimately illuminate his future?

The Light Jar is a captivating story of fear and hope, loneliness and friendship, and finding the light within, even in the darkest of times.
Lisa Thompson

Lisa Thompson is the author of The Goldfish Boy, The Light Jar, and The Day I Was Erased. She has worked as a radio broadcast assistant, first at the BBC and then for an independent production company making plays and comedy programs. During this time she got to make tea for lots of famous people. She lives in Suffolk, England, with her family. Find her on Twitter at @lthompsonwrites and at lisathompsonauthor.com.