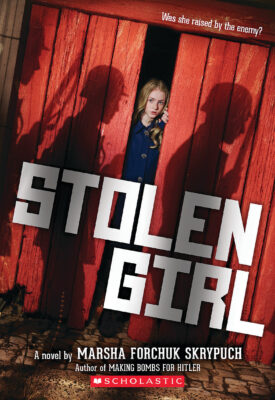 Nadia is haunted by World War II. Her memories of the war are messy, coming back to her in pieces and flashes she can't control. Though her adoptive mother says they are safe now, Nadia's flashbacks keep coming.

Sometimes she remembers running, hunger, and isolation. But other times she remembers living with a German family, and attending big rallies where she was praised for her light hair and blue eyes. The puzzle pieces don't quite fit together, and Nadia is scared by what might be true. Could she have been raised by Nazis? Were they her real family? What part did she play in the war?

What Nadia finally discovers about her own history will shock her. But only when she understands the past can she truly face her future.

Marsha Forchuk Skrypuch is a Ukrainian Canadian author acclaimed for her nonfiction and historical fiction, including Making Bombs for Hitler, The War Below, Stolen Girl, and Don't Tell the Nazis. She was awarded the Order of Princess Olha by the president of Ukraine for her writing. Marsha lives in Brantford, Ontario, and you can visit her online at calla.com.

--- - When it is my turn, Mutter tugs at my hair and braids it up more tightly than she needs to. "There," she says with a cold edge in her voice. She hands me the mirror. "Don't you look lovely?"

The face that looks back at me is the same one as always. I never think of myself as lovely.

A long black car with a small swastika flag on each side of the hood idles in the driveway as we walk outside. A uniformed man opens the back door. Mutter gets in first, then Eva, then me. The upholstery is lush black leather that gleams from a fresh buffing. The car door is closed with a firm click and we speed away.

It takes half an hour of fast driving to get into the city. The streets narrow. Our driver slows down so we can wave to the blocks and blocks of cheering crowds.

When we get within walking distance of the stage, the car stops. Soldiers push the crowd away so we can get out, and then they lead us to the steps on the side of the stage. Most of the chairs are taken by Nazi officers, but there are a few other mothers and children as well. We take our spots in the front row, behind the podium.

The crowd roars as another long black car pulls up. When the führer steps out, the crowd goes wild. Vater gets out of the car just behind the führer.

The crowd chants "Heil Hitler! Heil Hitler!" as the führer steps onto the stage, but it is as if he doesn't notice. He walks up to me and crouches down until we are eye level. He is so close to me that I can see his nose hair and smell the slightly spicy scent of his hair pomade.

"What a perfect specimen of Aryan youth you are, my dear," he says, pinching my cheek. I smile. What else can I do? Vater stands behind the führer, bursting with pride, but Eva looks like she is about to cry and Mutter's lips are a thin white line.