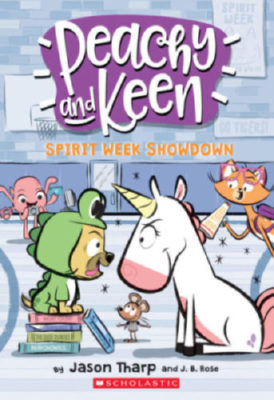 It's spirit week at Happy Tails School and Purrfect9 magazine wants to get in on the fun. Gertie the unicorn wants to start a daily vlog profiling the week and Connie the Octopus thinks a prank channel will get more views.
Editor-in-Chief Peachy decides whichever channel has the most total views by the end of the week will get to show their video at the big Pep Rally. It's Peachy and Gertie vs. Keen and Connie--may the best vlog channel win!

Jason Tharp has dreamed of being an author and inventing crazy creatures since he was a kid. Being an obsessive daydreamer and doodler has led him to create many licensed properties, write books, and design clothing and various other products. Jason's story proves that with hard work, determination, and a sprinkle of magic, anything is possible. He lives in Columbus, Ohio, with his super-awesome wife and kids, plus one extremely fat kitty.