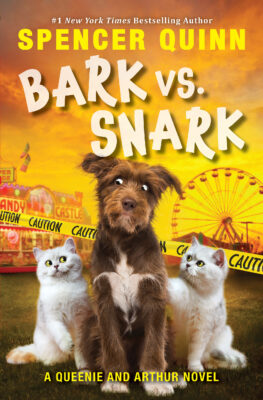 Bark vs. Snark : (A Queenie and Arthur Novel)

Arthur doesn't always remember where he buried his bone, or what he was doing before he started scratching his ear, but he never forgets three important facts:

1) Bacon is delicious
2) He loves his humans, twins Bro and Harmony, with all his heart
3) Queenie the cat is out to destroy him

So when Queenie wins first place in a feline beauty contest at the county fair, Arthur expects her to be snootier than ever. (Even though she barely beat out another cat who looked almost exactly like her.) Yet when Queenie returns from the fair, she seems oddly nice and sociable -- almost like she's had a personality change!

The humans chalk up Queenie's good mood to her recent win, but Arthur knows the truth. He can tell from the smell that this friendly Queenie is an imposter! Yet before he can decide what to do, Cuthbert the Clown -- the only one who knows what's really going on -- turns up missing. Arthur wants to help his humans find Cuthbert, but he has seen some disturbing things they have not. Can he solve a mystery on his own? Or will he have to accept that he needs Queenie as much as he needs bacon?
Spencer Quinn

Spencer Quinn is the author of the New York Times bestselling Chet and Bernie mystery books and the stand-alone novel The Right Side, both for adults. His novels for kids include the New York Times bestselling Bowser and Birdie novel, Woof, and the follow-up, Arf, as well as the Edgar Award-nominated Echo Falls series. Spencer lives with his wife, Diana, and dogs, Audrey and Pearl, on Cape Cod, Massachusetts.