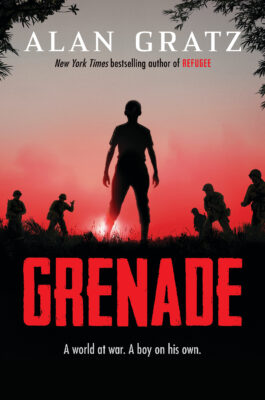 Hideki lives on the island of Okinawa, near Japan. When WWII crashes onto his shores, Hideki is drafted into the Blood and Iron Student Corps to fight for the Japanese army. He is handed a grenade and a set of instructions: Don't come back until you've killed an American soldier.

Ray, a young American Marine, has just landed on Okinawa. He doesn't know what to expect -- or if he'll make it out alive. He just knows that the enemy is everywhere.

Hideki and Ray each fight their way across the island, surviving heart-pounding ambushes and dangerous traps. But when the two of them collide in the middle of the battle, the choices they make in that instant will change everything.

From the acclaimed author of Refugee comes this high-octane story of how fear can tear us apart, and how hope can tie us back together.
Alan Gratz

Alan Gratz is the New York Times bestselling author of several highly acclaimed books for young readers, including Allies, Grenade, Refugee, Projekt 1065, Prisoner B-3087, and Code of Honor. Alan lives in North Carolina with his wife and daughter. Look for him online at alangratz.com.

--- - Grenade in one hand, rubber striking cap in the other, he took a deep breath and ducked into the bushes at the top of the hill. He crept forward until he could see over the ridge.

The dirt path below him was lined with American vehicles. Gray trucks filled with soldiers. Enormous clanking green things with cannons on top and treads for wheels. Open-topped jeeps pulling giant guns on trailers. There were scores of them. They kept coming around the bend in the road. And kept coming and coming.

Hideki ducked deeper into the thicket, afraid they would see him. His hands shook. How was this possible? How had the American devils been able to get so many vehicles past the Japanese defenses? Hideki had seen more automobiles on that road in five minutes than there had been in all of Okinawa before the war.

Hideki's shaking fear crystallized into a hard knot in his stomach, and he knew what he had to do. He had to take out one of those trucks with a grenade. This was his moment. This was his fate. He stood up, fully exposed if any of the soldiers in the trucks had bothered to look up at him, and got ready to strike the match-like fuse on his grenade.

For the Emperor, Hideki told himself. For Japan. For my family.

Hands grabbed Hideki and pulled him back into the bushes before he could activate his grenade. Hideki turned around. It was Yoshio!

"What are you doing?!" Hideki cried.

"The Americans -- they're close by!" Yoshio told him.