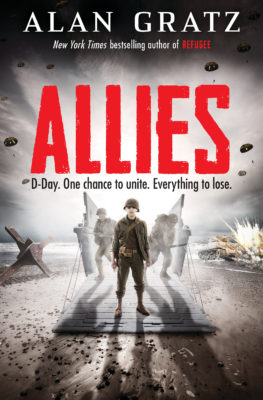 June 6, 1944: The Nazis are terrorizing Europe, on their evil quest to conquer the world. The only way to stop them? The biggest, most top-secret operation ever, with the Allied nations coming together to storm German-occupied France.

Dee, a young U.S. soldier, is on a boat racing toward the French coast. And Dee -- along with his brothers-in-arms -- is terrified. He feels the weight of World War II on his shoulders.

But Dee is not alone. Behind enemy lines in France, a girl named Samira works as a spy, trying to sabotage the German army. Meanwhile, paratrooper James leaps from his plane to join a daring midnight raid. And in the thick of battle, Henry, a medic, searches for lives to save.

In a breathtaking race against time, they all must fight to complete their high-stakes missions. But with betrayals and deadly risks at every turn, can the Allies do what it takes to win?
Alan Gratz

Alan Gratz is the New York Times bestselling author of several highly acclaimed books for young readers, including Allies, Grenade, Refugee, Projekt 1065, Prisoner B-3087, and Code of Honor. Alan lives in North Carolina with his wife and daughter. Look for him online at alangratz.com.