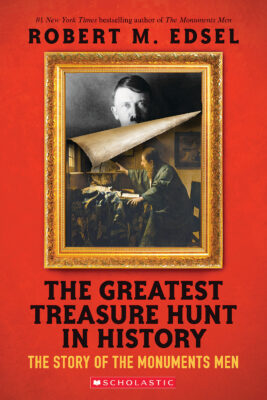 Greatest Treasure Hunt in History, The : The Story of the Monuments Men

As the most destructive war in history ravaged Europe, many of the world's most cherished cultural objects were in harm's way. The Greatest Treasure Hunt in History recounts the astonishing true story of 11 men and one woman who risked their lives amidst the bloodshed of World War II to preserve churches, libraries, monuments, and works of art that for centuries defined the heritage of Western civilization. As the war raged, these American and British volunteers -- museum curators, art scholars and educators, architects, archivists, and artists, known as the Monuments Men -- found themselves in a desperate race against time to locate and save the many priceless treasures and works of art stolen by Adolf Hitler and the Nazis.
Robert M. Edsel

Robert M. Edsel is the author of three books about the Monuments Men, including the #1 New York Times bestseller The Monuments Men, which Academy Award recipient George Clooney adapted into a feature film in 2014; and Saving Italy, also a New York Times bestseller. He is also the coproducer of an Emmy-nominated documentary film. In 2007 he founded the Monuments Men Foundation for the Preservation of Art, recipient of the National Humanities Medal, the United States' highest honor for work in the humanities. Mr. Edsel has received numerous awards for his work honoring the Monuments Men and Women and his advocacy of art preservation. He has served as a trustee on numerous not-for-profit organizations, including The National WWII Museum and St. Mark's School of Texas. He lives with his family in Dallas, Texas.

--- - ! 'Second Lieutenant -- and former museum curator -- Jim Rorimer knew practically every inch of the Louvre, one of the largest and most frequently visited art museums in the world. The paintings and sculpture that covered the walls and filled its rooms were as recognizable to him as his oldest friends. But that was a different time. War had a way of making familiar ground feel unfamiliar.

An unsettling silence had replaced the hustle and bustle of tourists. As Rorimer ascended the grand entry stairwell, he was shocked by the absence of one of the Louvre''s signature pieces, a work that for decades had towered over all who climbed the steps: The Winged Victory of Samothrace, a second-century BCE Greek sculpture. At the top of the staircase he turned right, then right again into the main gallery. The paintings were also gone. In their place, someone had handwritten in chalk the names of artists and inventory numbers of their work. The Louvre was empty: no visitors, no works of art, just a lone Monuments Man armed with dozens of questions, striding with purpose -- Rorimer always walked with purpose -- down the Grande Galerie of the museum on his way to an appointment.'