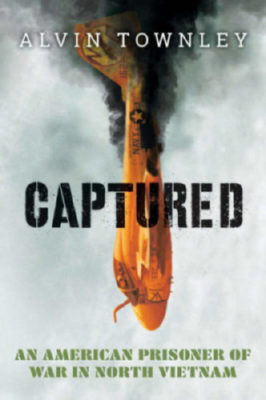 Captured: An American Prisoner of War in North Vietnam

Naval aviator Jeremiah Denton was shot down and captured in North Vietnam in 1965. As a POW, Jerry Denton led a group of fellow American prisoners in withstanding gruesome conditions behind enemy lines. They developed a system of secret codes and covert communications to keep up their spirits. Later, he would endure torture and long periods of solitary confinement. Always, Jerry told his fellow POWs that they would one day return home together.

Although Jerry spent seven and a half years as a POW, he did finally return home in 1973 after the longest and harshest deployment in US history.

Denton's story is an extraordinary narrative of human resilience and endurance. Townley grapples with themes of perseverance, leadership, and duty while also deftly portraying the deeply complicated realities of the Vietnam War in this gripping narrative project for YA readers.
Alvin Townley

Bestselling author Alvin Townley has traveled the world to discover inspiring stories of leadership, adventure, purpose, and personal triumph. He is the author of the adult books Legacy of Honor, Spirit of Adventure, Fly Navy, and Defiant, and was part of the Emmy Award-winning team behind the documentary film Jeremiah. He speaks often, to both youth and adults, about subjects he holds dear, including veterans, character, perseverance, and citizenship. He lives in Atlanta with his wife; learn more at AlvinTownley.com.

--- - On bright mornings, Jerry watched the sunlight trace a path across his floor. Its transit always proved brief, lasting just the fleeting moments rays could angle through the iron bars of his cell's solitary window. When the patch of light disappeared, he turned to the cockroaches, ants, and occasional rats that scurried across his floor - ! ' their movements brought his static world rare variety. He silently observed mosquitoes alight on the sill, on the walls, and on his arms. Sometimes, he found energy to swat them away. Other times, he''d passively watch them suck their fill. If he squashed their bloated bodies, his own blood would splatter across his arm, leg, or whatever body part the mosquito had chosen for its meal. Blood would mingle with perspiration. He''d wipe up the mess with a dirty sleeve.

The temperature rose as the sun crossed the sky and stoked the Southeast Asian humidity. The hot air inside the walls hardly ever stirred' - ! ' it was so thick he sometimes had trouble inhaling. He sipped his ration of water frugally, knowing the cup had to last most of the day. The ration never could replace what he sweated out, but he somehow managed. He moved as little as possible. He spent most days lying on a mat atop a raised concrete sleeping platform. The leg stocks at the platform''s end reminded him of the punishment that typically accompanied upholding his sacred Code and refusing to submit to his captors'' will. His ankles had spent time in the stocks before. When a man''s honor is all he has left, he does not surrender it easily.

Jerry could only control what he said or wrote. The prison''s cadre of guards and officers, the Camp Authority, governed everything else. His existence did not seem his own. Only the Camp Authority determined who and what passed through the padlocked door into his little room. They brought greasy the soup he had to eat. They brought him scraps of toilet paper' - ! ' they dictated when he could bathe or empty his stinking latrine bucket. Worst, they opened the peephole at will, spying on him as if he were a lion in a zo -- an old grizzled lion, at that, he thought. And he knew their methods could best his willpower. If they wanted him to talk, to confess, they eventually succeeded. But never without a fight from their prisoner.

The world he''d formerly known had, from his perspective, stopped spinning on July 18, 1965' - ! ' he knew that much. Now, nearly one year later, he had little knowledge of that world. He couldn''t trust the news passed along by the Camp Authority or the propaganda broadcasts piped into his cell. Yet he puzzled over what he did hear about the war and politics at home in the United States. He wondered if his family, friends, and shipmates even knew he was still alive. He''d begun to doubt he''d ever see them again.

A full year had passed since he last hugged his wife and seven children. He could still picture them in the front yard, framed by May flowers -- he was sure it was May, May 1965 -- as he left for a deployment to the South China Sea. He''d promised he''d be home for Christmas. He sailed eastward aboard the aircraft carrier USS Independence, transiting the Atlantic, Mediterranean, and Indian Oceans to arrive off the coast of North Vietnam. Just one day before he assumed command of his squadron, he''d lost his aircraft, been forced to eject, and wound up imprisoned in Hanoi, the enemy''s capital. He spent Christmas alone, trying to picture his family opening presents without him. He hoped his youngest would remember their father' - ! ' he hoped his wife would wait for him.

To his family, he was becoming a memory. To the American military, he had become a prisoner of war. To the North Vietnamese, he was a war criminal. They constantly reminded him his trial was near' - ! ' he would pay for crimes against innocents committed during an undeclared war.

Jerry swung his wasted body to the floor and knelt near the wall. He placed one end of his drinking cup to his ear and the other end to the wall. He rapped his knuckles twice. Tat-tat -- "two bits" -- he tapped in reply. Two American prisoners of war had, in code, just reassured each other they were not alone, at least not tonight.

He learned Air Force ace Robbie Risner now occupied the adjacent cell. Thank God Risner knew him as Jerry, not Jeremiah as his captors called him. That small comforting knowledge restored a measure of humanity to his life' - ! ' he was with a friend.

Jerry brought a dilemma to Risner. The commandant of the prison, a man the Americans called "Cat," had told Jerry that the next day, May 2, 1966, he would speak to a reporter. Cat demanded Jerry comply. He demanded Jerry parrot the North Vietnamese perspective. More torture would accompany any refusal, deviation, or especially any misbehavior on air. Jerry had been through the ropes -- quite literally -- enough to know the sincerity of the threat.

When Jerry joined the US Navy, he''d sworn an oath to never make disloyal statements, to never visit dishonor upon his fellow servicemen, to never say more than the minimum to any foreign captors. Yet he feared more torture would kill him. How could he abide by the Code and survive? How could he turn this circumstance to his advantage? He and Risner tapped back and forth. After a period of deep thought, Jerry tapped, "I''ll go, and blow it wide open."'