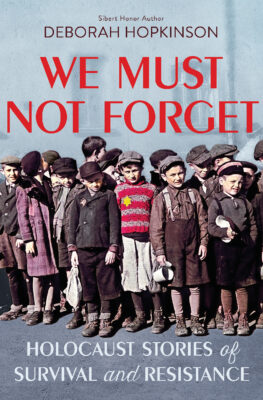 We Must Not Forget : Holocaust Stories of Survival and Resistance

As World War II raged, millions of young Jewish people were caught up in the horrors of the Nazis' Final Solution. Many readers know of Adolf Hitler and the Nazi state's genocidal campaign against European Jews and others of so-called "inferior" races. Yet so many of the individual stories remain buried in time. Of those who endured the Holocaust, some were caught by the Nazis and sent to concentration camps, some hid right under Hitler's nose, some were separated from their parents, some chose to fight back. Against all odds, some survived. They all have stories that must be told. They all have stories we must keep safe in our collective memory.

In this thoroughly researched and passionately written narrative nonfiction for upper middle-grade readers, critically acclaimed author Deborah Hopkinson allows the voices of Holocaust survivors to live on the page, recalling their persecution, survival, and resistance. Focusing on testimonies from across Germany, the Netherlands, France, and Poland, Hopkinson paints a moving and diverse portrait of the Jewish youth experience in Europe under the shadow of the Third Reich. With archival images and myriad interviews, this compelling and beautifully told addition to Holocaust history not only honors the courage of the victims, but calls young readers to action -- by reminding them that heroism begins with the ordinary, everyday feat of showing compassion toward our fellow citizens.
Deborah Hopkinson

--- - ! 'One day in 1934, a young Berlin teen named Eva Lauffer was walking down the street with her friend Emily. As a group of men carrying the Nazi flag came toward them, the teens pretended to look in a store window display. They were Jewish, and didn’t want to salute the flag with the expected "Heil Hitler!" greeting.

Suddenly, one man broke away, ran up to the girls and slapped them hard in the face. The message was clear: under the Third Reich and Hitler''s Nazi Party (National Socialist German Workers'' Party), any act of defiance carried a risk -- and a price.

After that day, Eva and her friend Emily made a resolution. They might not be able to risk defiance, but they didn''t have to comply either. They decided that whenever they spotted a group of Nazis marching with a flag, they''d simply turn around and walk in the other direction or slip into a building out of sight.

"Because we absolutely refused to greet the flag," Eva declared.

Eva Lauffer Deutschkron was born on November 12, 1918 in Posen, Germany (now Poznan, Poland). More than sixty years later, in September of 1980, she shared her story with the Wisconsin Historical Society. It was a long interview -- seven hours over two days. (At the end of this chapter and in the back, there''s a link so you can hear Eva''s voice.)

Eva''s story is unusual: As a young woman she survived the Holocaust in Berlin, Germany, the epicenter of Nazi power. She and her husband, Martin Deutschkron, lost everyone they loved, except for one another. Their harrowing ordeal shows us how Hitler''s Nazi regime relentlessly tore families apart in their pursuit of one goal: the eradication of the Jewish population of Europe.'