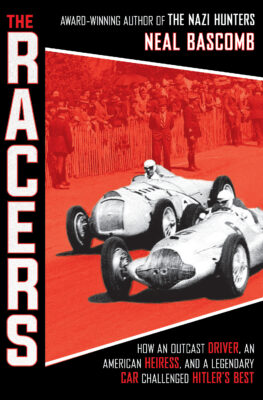 Racers, The : How an Outcast Driver, an American Heiress, and a Legendary Car Challenged Hitler's Best

In the years before World War II, Adolf Hitler wanted to prove the greatness of the Third Reich in everything from track and field to motorsports. The Nazis poured money into the development of new race cars, and Mercedes-Benz came out with a stable of supercharged automobiles called Silver Arrows. Their drivers dominated the sensational world of European Grand Prix racing and saluted Hitler on their many returns home with victory.

As the Third Reich stripped Jews of their rights and began their march toward war, one driver, René Dreyfus, a 32-year-old Frenchman of Jewish heritage who had enjoyed some early successes on the racing circuit, was barred from driving on any German or Italian race teams, which fielded the best in class, due to the rise of Hitler and Benito Mussolini.

So it was that in 1937, Lucy Schell, an American heiress and top Monte Carlo Rally driver, needed a racer for a new team she was creating to take on Germany's Silver Arrows. Sensing untapped potential in Dreyfus, she funded the development of a nimble tiger of a new car built by a little-known French manufacturer called Delahaye. As the nations of Europe marched ever closer to war, Schell and Dreyfus faced down Hitler's top drivers, and the world held its breath in anticipation, waiting to see who would triumph.
Neal Bascomb

--- - Into the next hairpin, René shifted down into second gear. He and Maurice were sandwiched together as they went into the turn. Coming out of it, he accelerated, the rrraaaappppp-rrrrrraappppppppp of the Brescia echoing across the jagged mountains. There were a couple hundred feet until the next bend. There was no point in saving his engine or worrying about his tires. The race was too short.

René knew every bend, hollow, turn, and rise on the course. He knew precisely where to angle the front wheels into a corner, exactly how far to allow the Brescia to drift for the following turn, and the best gear for every point on the road. Finally, the course flattened out. Ahead, they saw a crowd of ladies in dresses and gentlemen in suits lining the road, children sitting at their feet. The finish. René left nothing in the engine as he shot across the line, a whirl of dust and gravel behind him.

The clock read 5 minutes 26.4 seconds, an average of 43 miles per hour (mph), or 69.2 kilometers per hour (kph). It was a very fast time -- the fastest ever at La Turbie in his small-engine class. Now he had to wait for the others. By early afternoon, all the competitors had finished. René had clocked the sixth-fastest time and was first in his category, beating his nearest rival by almost a minute and a half. Rousing congratulations, a shiny medal, and a celebratory dinner were his rewards for his biggest win yet.

These were all very nice, but René was impatient to be a professional race car driver. There was nothing more he wanted from life.